You are here: Home > Be inspired > From the shop floor to the classroom 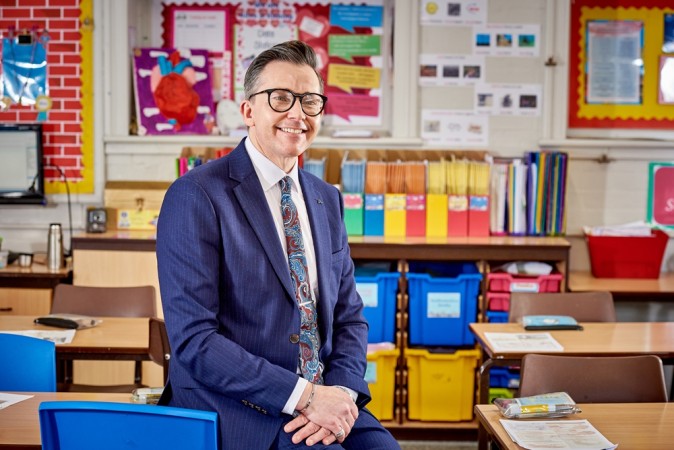 “Through teaching I’m determined to make a difference for pupils like the young me. I passionately believe that very child in Bradford deserves to have the same expectations, confidence and life chances as a child born in Kensington or Cambridge."

From the shop floor to the classroom: A journey into teaching

When Chris Evans gave up his job in retail sales to look after the two young children he’d recently adopted, he had no idea it would be the first step on a roller-coaster journey into teaching and school leadership.

Chris Evans is justifiably proud to have recently been appointed Deputy Head at Saltaire Primary.

It’s the school his children attended.

It’s also the school that, some 14 years ago, inspired him to re-imagine his life and completely flipped his career aspirations on their head.

47-year-old Chris gave up his job a successful retail executive to become a full-time dad when he and his partner adopted two young children in 2004.

It was a career break that gave him the chance to step back and re-evaluate his priorities.

But, as his children reached school age, it soon became clear that it wasn’t going to be just a break from retail, but a turning point in Chris’s professional career.

“Almost from the day my oldest started at Saltaire I became fascinated with every aspect of school life,” explains Chris.

“I was awestruck with how much they loved being part of such a vibrant, diverse community and it made me reflect on my own early experiences of school and the teachers that inspired me when I was younger.”

“It turns out the seed was sown and I knew pretty quickly afterwards that working in education was what I wanted to do with the rest of my working life.”

When an opportunity arose to become a learning mentor at his children’s’ school, helping some of the more challenged pupils engage with school life, Chris jumped at the chance.

It was an experience that convinced him to re-take the maths and science GSCEs he had failed as a teenager and enroll for his teaching qualifications at the Open University (OU). 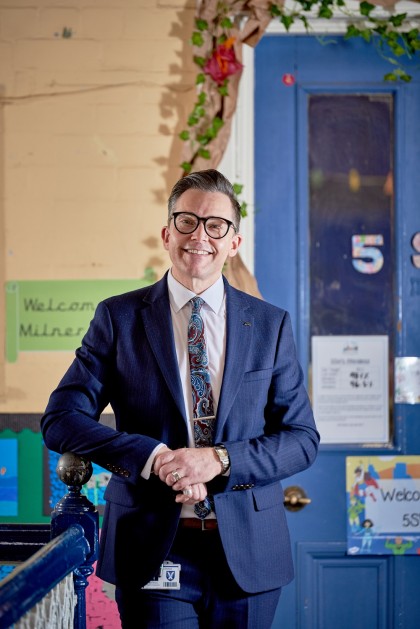 “I already had an HND, so for me it was about filling in the gaps and then getting the right number of higher education top-up points to get me onto the next rung of the ladder,” says Chris.

“To be honest it wasn’t something I was looking forward to, on top of children and a full-time job, but I was determined to tick off the next thing on the list on my way to being able to teach. As it happens I enjoyed the whole OU experience far more than I ever imagined.”

Chris undertook his School-centred initial teacher training (SCITT) year at Saltaire, working in Year 3 and attending college once a week. And when he qualified in 2015, there was only ever going to be one school he wanted to be at to begin his formal teaching career.

“My ambition from the start of the process was to work in a school that was interesting, challenging and diverse – and I’d already found that at Saltaire.

“Here you have the whole cross section of society. There’s every type of child, all from different backgrounds, with different expectations and ambitions.”

And ambition, explains Chris, is what lies at the heart of his motivation to teach.

“When I was at school we had a class ranking and I was 17th out of 25. I wasn’t the most able or the least able and after a while I found myself becoming content to be number 17. I became OK with just being somebody somewhere in the pack.

“For most of my life that’s had an affect on me, in terms of my expectations of myself.

“Through teaching I’m determined to make a difference for pupils like the young me. I passionately believe that very child in Bradford deserves to have the same expectations, confidence and life chances as a child born in Kensington or Cambridge.

“I once thought success at work was about hitting sales targets but now I know there can’t be a better or more privileged position to be in than being able to widen a child’s world and encourage them have big aspirations.”

But he believes strongly that people like him, who find their passion for teaching later in life, are a vital part of the fabric of Bradford’s school system.

“All schools need a rich mix of different types of teacher but it’s particularly important in a place as diverse as Bradford.”

“Of course you need the wise owls who’ve been around a long time and know everything and everybody. You also need young vibrant and enthusiastic newly qualified teachers and the people with experience from outside who can bring new perspective.

“Ultimately children need lots of different role models so they can maximise the chances of finding one that they can identify with.”

“Through teaching I’m determined to make a difference for pupils like the young me. I passionately believe that very child in Bradford deserves to have the same expectations, confidence and life chances as a child born in Kensington or Cambridge."